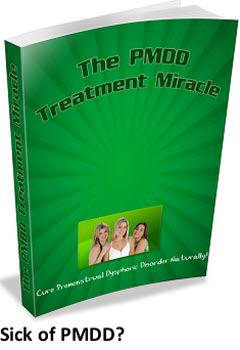 An interesting, and potentially important, model for the serotonergic balance theory of mood stability is found in premenstrual dysphoric disorder (PMDD). This condition, though often trivialized by the lay press, is a mental illness, often disabling, and occasionally life-threatening. The current psychiatric diagnostic category for severe premenstrual syndrome (PMS), PMDD, is categorized in DSM-IV as a 'Depressive Disorders Not Otherwise Specified,' in recognition of its close relationship with other mood disorders.

Symptoms that are seen in PMDD, and are required for the diagnosis, include low mood, mood swings, tension and irritability during the late luteal phase of the menstrual cycle. Thus, PMDD is a primarily psychiatric or behavioral condition, and the diagnosis is not used to describe women who suffer from only physical premenstrual symptoms, such as breast pain and bloating, even though these may be severe. There is a close relationship between PMDD and major depressive disorder, since 30% of women who suffer from PMDD have a prior history of major depression.28 Also, women with PMDD are at greater risk for eventually developing major depression, even if they have not had antecedent depression.29 Thus, PMDD represents a mood disorder with a clear and predictable physiological etiology, and, as such, a potential model for research.

A number of biological investigations including patients who suffer from PMS as well as PMDD have linked the pathophysiology of these severe premenstrual disorders to 5-HT.30 Older studies investigating platelet [3H]5-HT reuptake in women suffering from PMS have found that luteal phase platelet [3H]5-HT reuptake is decreased in women suffering from either PMS or PMDD.31,32 However, there are several studies which have failed to confirm this finding.33,34 Using the ligand [3H]imipramine to explore 5-HT reuptake, one research group found reduced binding sites in PMDD women compared to controls during the early luteal phase, while a second study reported increases in PMDD women during both phases of the cycle, although statistical significance was attained only during the follicular phase.35 Although the majority of studies suggest a decrease in the number of 5-HT reuptake sites in women with PMS or PMDD, there are some inconsistencies which may be due to the ways in which patients were diagnosed as well as the various time points during the menstrual cycle during which uptake was investigated.

Primate data suggest that low 5-HT is associated with changes in sleep, appetite and irritability. Given these findings, Rapkin36 investigated levels of whole blood 5-HT in women with severe premenstrual dysphoria compared to controls. It was found that symptomatic women had lower levels of whole blood 5-HT than asymptomatic controls. The induction of low plasma levels of 5-HT through a paradigm of tryptophan depletion supports these earlier findings. Menkes and colleagues37 administered a neutral amino acid cocktail low in tryptophan to women with PMDD and controls during both times of the menstrual cycle. Theoretically this depletion of the 5-HT precursor, tryptophan, should lead to lower central 5-HT levels.19 Menkes and colleagues37 found that depletion of tryptophan was more likely to provoke premenstrual symptoms in women with PMDD than controls. Symptom provocation occurred during both the luteal and follicular phase, although it was more evident during the follicular phase when symptoms are normally low.37 Unpublished data from a second site confirms the capacity of tryptophan depletion to provoke symptoms in PMDD women (Halbreich, personal communication). A recently presented study found that the strength of the amino acid cocktail (i.e., greater concentration of neutral amino acids) was correlated with tryptophan depletion and symptom provocation.38 Thus, women with PMDD who drank a 100 g cocktail of neutral amino acids without tryptophan had greater depletion and more symptoms than women with PMDD who drank a 50 g cocktail of neutral amino acids without tryptophan. These three studies support a role for lower functional 5-HT levels in women with PMS or PMDD; certainly the artificial lowering of peripheral and central tryptophan levels leads to symptom provocation.

Neuroendocrine challenge provides another method for probing the integrity of the serotonergic system in PMDD women. Administration of tryptophan to women with PMDD produced a blunted growth hormone and cortisol response compared to the response found in control women. These differences were detected during both phases of the menstrual cycle,39 suggesting that trait differences exist between PMDD patients and controls. When the prolactin response to tryptophan administration was evaluated, blunting occurred only during the premenstrual phase in this same group of symptomatic women. The more selective 5-HT1A partial agonist, buspirone, also led to a blunted prolactin response in PMDD patients compared to controls.40 However, women were tested only during the follicular phase, which is when the difference was detected. It is not known whether this partial agonist would have caused blunting in the luteal phase also. Two groups have investigated the prolactin response using a different probe, fenfluramine. One study41 found no differences between symptomatic PMDD women and asymptomatic controls while a second study42 found blunting in symptomatic women during the luteal phase.

Finally, treatment response is another indicator that 5-HT has a role in the pathophysiology of PMDD. Agents which are specific for the 5-HT transporter are effective treatments for PMDD and include clomipramine,43,44 fenfluramine,45 fluoxetine,28,46-52

Importantly there are several studies which suggest that agents working at the 5-HT transporter are more effective than other antidepressants. These include the trial of Ericksson and colleagues53 which found paroxetine superior to maprotoline and a trial finding greater benefit with fluoxetine than bupropion.50 Finally a recently presented study found sertraline to be more effective than desipramine.56

In sum, literature investigating the psychobiology as well as the treatment of PMDD supports a role for 5-HT in the pathophysiology of the disorder which could therefore provide a potentially useful model for future research.

How to Stop Your Depression Now

Finally, Retired Clinical Counsellor Reveals the Secrets Successful Psychiatrists and Psychologists Don't Want You to Know. How to Stop Your Depression Now Reclaim Yourself and Live Again Get the Depression Busting Tools You Need To Win the War Against Depression. Depression is an illness that many people often sweep under a rug. However if depression is left untreated... Your life can become a living nightmare. Depression is a growing epidemic in the US, but it never gets the urgent attention it deserves. You need help and you need it now.