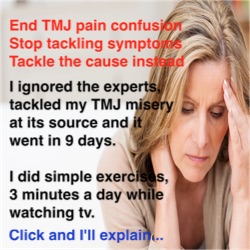 The TMJ capsule defines the anatomic and functional boundaries of the TMJ. The thin, loose fibrous capsule surrounds the articular surface of the condyle and blends with the periosteum of the mandibular neck. On the temporal bone, the articular capsule completely surrounds the articular surfaces of the eminence and fossa (Fig. 12-3). Attachments of the capsule adhere firmly to bone. Anteriorly, the capsule is attached in front of the crest of the articular eminence; laterally, it adheres to the edge of the eminence and fossa; and posteriorly, it extends medially along the anterior lip of the squamotympanic and petrotympanic fissure. The medial attachment runs along the sphenosquamosal suture. The articular capsule is strongly reinforced laterally by the temporomandibular (lateral) ligament, composed of a superficial fan-shaped layer of obliquely oriented connective tissue fibers and a deeper, narrow band of fibers that run more horizontally (Fig. 12-3). The ligament attaches broadly to the outer surface of the root of the zygomatic arch and converges downward and backward to attach to the back of the condyle below and behind its lateral pole.

The articular disk is a firm but flexible structure with a biconcave shape (Fig. 12-4). The disk is usually divided into three regions: posterior band, intermediate zone, and anterior band. The central intermediate zone is considerably thinner (1 mm) than the posterior (3 mm) and anterior (2 mm) bands. The upper surface of the disk adapts to the contours of the fossa and eminence of the temporal bone, and the lower surface of the disk adapts to the contour of the mandibular condyle.

The articular disk of the TMJ is a hypovascular intra-articular structure that separates the condylar head from the glenoid fossa. It is firmly attached to the condyle at its lateral pole; it is not directly attached to the temporal bone. The articular disk and its posterior attachment tissues merge with the capsule around their periphery. The disk and its attachment divide the

Figure 12 4 Sagital section through the temporomandibular joint (TMJ). The articular disk (D) is white because of its avascularity. The bilaminar zone (BZ) is red as a result of its lush blood supply . The lateral pterygoid muscle (LPtM) may have some fibers that attach to the anterior portion of the disk